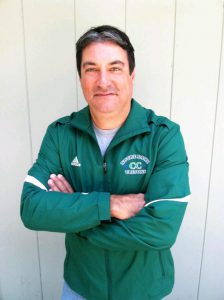 Coach Barrette graduated from Peshtigo High School in 1973 where he participated in football, basketball, and track.  His sophomore year he was part of the 1971 WIAA State Championship track team.  Coach Barrette received his Bachelor of Science Degree in 1977 majoring in physical therapy from Marquette University.  In 1984 he completed his Master’s of Science Degree in Sports Biomechanics through UW-LaCrosse.  Kim went on to Sun Valley, Idaho to be a part of the prestigious Sun Valley Cross Country Ski Team.  During this time, he trained and competed against the US Nordic National Team.  In addition, he competed in the longest ski race in North America, the American Birkebeiner, 4 times and 24 Kortelopets finishing 28 and 29 in 1982 and 1983.  He has competed in several international cross country ski races.

Most recently, Kim has coached many youth sports teams.  In 2008, he took on the role of head coach of Peshtigo girl’s softball.  The Peshtigo High School Girls Softball Team achieved 4 consecutive conference titles, 5 successful seasons,  2 regional, 1 sectional and a WIAA State championship in 2010.  The girl’s softball program during Mr. Barrette’s tenure, had a winning record of 75-28.  The 2010 State Championship was the first in history for girls sports at Peshtigo High School.

Coach Barrette owns and operates Tri-City Physical Therapy and Sports Medicine in Marinette, WI. He is an active member of the American Physical Therapy Association, Sports Section and he is also a member of the National Strength and Conditioning Association.  In his spare time, Kim enjoys continued participation in cross country competitive ski events and spending quality time with his wife and children.  His two children Brandon and Brittany, participated at Peshtigo High School in Cross Country running program with Brandon achieving a 16th place in D2 in 2011.  Brandon is currently a dental student at Marquette University.  Brittany is a Nurse Practitioner at Bellin Hospital In-Patient Rehabilitation Unit.