John Gard has been head coach for boys and girls since 2009. 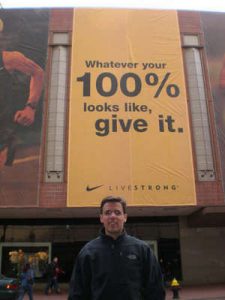 Coach Gard is pleased to have an outstanding group of coaches working with him to continue to grow the size and the success of the NDA cross country program. “We are blessed with terrific young adults, amazing parents, a supportive school environment that has helped build one of the best stories in high school athletics in Wisconsin,” says Coach Gard.

Coach Gard comes from a running tradition.  He ran track in high school at Lena and ran cross country and track for 4 years at UW-LaCrosse.  He credits that experience with increasing his passion, knowledge and dedication to a lifetime of running.  “UW-LaCrosse has an incredible tradition that helps mold young runners into great people, that’s what we seek to accomplish at Notre Dame Academy,” says Gard.

“I believe in big numbers of kids in the program, dedicated off-season training and having lots of fun,” stated Gard.   “We will commit ourselves to giving every runner that pays the price through hard work the opportunity to succeed when they put on that Notre Dame Academy uniform,” pledged the Coach.  “Wherever a runner fits on the team, we want them to reach their optimum potential.”

Coach Gard continues to run today. He has run the Boston Marathon 8 times since 2008 and numerous other marathons. “Running and training for marathons clears my mind, gives me something to train for and brings me closer to God, each of those are very important to me,” said Gard.

John comes from a lifetime of public service.  He is the former Speaker of the Wisconsin Assembly (2003-2006) and served in the legislature for 19 years.

He and his wife Cate have two children; Elisabeth a recent grad of Marquette law school and John Vincent, a former NDA CC runner and UW grad. They live in Suamico.