Bill Hawley is originally from Rock Island, IL where he attended Alleman Catholic High School and competed in Track and Cross-Country. Bill made it to State 3 out of the 4 years in Cross-Country with his last year making All State honors. Bill competed at State 3 years in track. He competed at State in different events including 800, 1600, 3200 meter relay and 3200 meters. Bill Hawley’s 3200 Meter Relay Team won state in 1994 and they were inducted into Alleman High School Hall of Fame in 2014. Bill is still on the top 25 list for Best Cross Country runners at Alleman High School. Bill Hawley decided to not accept any college scholarships for running when attending college. 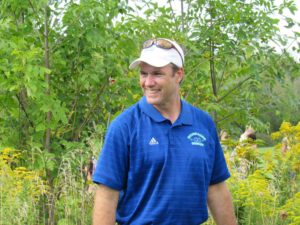 Coach Hawley is the owner of Premier Logistics LLC which he and his wife started September 4th, 2012 and it successfully continues to grow today. Bill is married to his wife Jenny Hawley for now 21 years. They both have 4 children: Kayla who is a Sophomore at University of Wisconsin Green Bay running under a cross country scholarship;  Emily who is a Senior at NDA and running Cross Country and Softball; Conner who is a Junior at NDA and running Cross Country and Track; and our little Bryce who is a Freshman at NDA and running Cross Country and Track. The Hawley’s are all runners where they do many road races throughout the year as a family. All of the Hawley kids are involved with many sporting activities throughout the year. The Hawley family enjoys camping, attending their kids sporting events, road races, volunteering, biking, hunting, weekend trips, and having Sunday dinner together where we can all come together.

This is Bill’s fifth year coaching at NDA Cross Country and looks forward for another successful year.