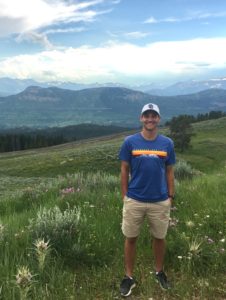 Dylan Lange returns to Notre Dame Academy for his fourth season with the cross country program, but first as an assistant coach. A 2013 graduate of Notre Dame Academy, Coach Lange ran both cross country and track for three years. He was a member of the first boys team to qualify for the state meet during Coach Gard’s tenure, running as the team’s fifth scorer as part of its overall 15thplace finish in 2010. Dylan also served as a team captain during his senior year season.

Coach Lange graduated from the University of Wisconsin-Eau Claire in 2016 as a double major of business administration and political science, while also obtaining a certification in advanced business communications. He then moved to Washington, D.C. to serve as a policy adviser to Congressman Mike Gallagher. Dylan made his return to Green Bay in January 2018 to rejoin forces with Coach Gard at Gard Business Group, where he currently holds the position of Coalitions Manager.

Coach Lange has remained active in the running community and continues to compete in area races. He also completed his first season as the distance track and field coach at Notre Dame Academy in the spring of 2018, specializing in the 800m, 1600m, 3200m, and 3200m relay events.

Dylan credits distance running, the Notre Dame Academy coaching staff, and his former teammates for helping him grow and succeed both on and off the racecourse. He is excited to return the lessons and positive impact that Notre Dame Cross Country had on him to this year’s team.